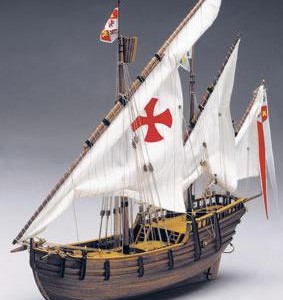 Mantua Nina wood ship kit. Model # 756. The scale of this ship is 1:50, She has a Length is 22.25 Inches, height of 17.5 Inches The Nina and Pinta, are two of the ships in Columbus’ fleet which were known as caravels. The caravels had a shallower draft than Santa Maria, so it could move around in the waters more easily. The caravel was 150-300 tons.

She did not have much cargo space, but it was able to sail over difficult waters with ease. It was square-rigged on its foremasts and mainmasts, but used a lateen sail on the mizzen to help in tacking. It was so easy to control that sailors could easily explore shallow bays and the mouths of rivers.

A caravel could hold about twenty crew members. They usually slept on the deck and would go below only if the weather was bad. Pinta was a caravel, a smaller, lighter, and faster ship than the tubby Santa Maria. She had three masts, and most likely carried sails like those of Santa Maria, except for the topsail, and perhaps the spritsail.

Be the first to review “Mantua Nina” Cancel reply