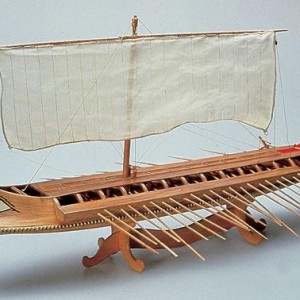 Superbly detailed and accurate model of the Greek/Athenian Bireme. This was cutting edge technology when built, being very fast and with her bow ram, deadly, as the Persian fleet discovered at the Battle of Salamis. The Bireme was managed by 44 oarsmen working in two banks of oars (Hence the name ‘Bireme’ – a trireme had three banks of oars, a Quingereme five banks..) The style of vessel changed little from 480BC to late Roman Empire times, so the model could be used as a basis for a Roman vessel.

Be the first to review “Amati Greek Bireme” Cancel reply