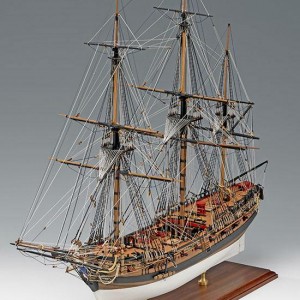 The H.M.S. Fly was the fifth of the Swan Class of ship rigged sloop, of 25 vessels built from 1766 to 1780. Fly, as with the entire Swan class was designed by Williams and her construction was ordered by the Admiralty on 1st August 1775 to be built at Sheerness Dockyard. The keel was laid in January 1776 and launched on 14th September 1776.

H.M.S. Fly was commissioned mainly for convoy escort duty and dispatch duty. She did capture a French privateer, Le Gleneur, off Portland after a long chase. In 1800 she captured another French privateer, the Cutter Trompeur off La Hague. Fly continued convoy duties until she foundered and was lost off Newfoundland during 1802.
The Swan class were unusually attractive for the class of vessel, with not only very sleek hull lines but also the unusual amount of decorations for the size of vessel.

Be the first to review “Amati HMS Fly” Cancel reply