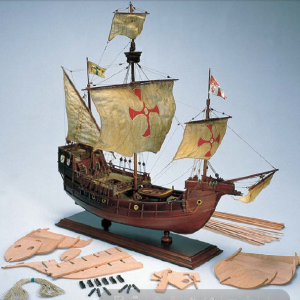 On October 12th, 1492 Christopher Columbus, in the service of Spain, set the Spanish flag on an island of an unknown world to Europe. This extraordinary adventure was due to the strong perseverance of a foreign man haunted by the conviction that the Atlantic Ocean was but a sea, narrow enough to be sailed in a few days.

The Santa Maria was Columbus flagship and it is still one of the best known ships in the history of the navy. Columbus nicknamed it “Nao”, but at the very beginning its name was La Gallega. Its owner Juan de la Cosa chartered it to Columbus for his journey to the unknown world.

Be the first to review “Amati Santa Maria” Cancel reply