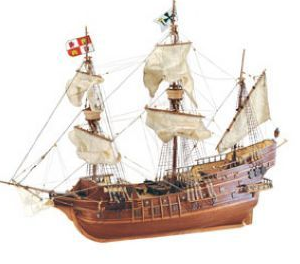 Discover the San Juan, a wooden model kit of this XVI century Spanish galleon. The galleons were the most powerful ships of their time and backbone of Spanish sea power during the XVI and XVII centuries. Guided by our detailed step by step instructions you can complete your model of this legendary ship.

The galleons appeared halfway through the XVI century, forming the core of the Spanish “Invincible Armada”. For nearly 150 years they were the ships par excellence for its combination of high-capacity firepower transport, which made them ideal for long ocean voyages between Spain and the New World.

Build your 1/30 scale model of the San Juan, a XVI century Spanish galleon. Its construction system using false keel and frames brings the assembly of your model closer to the construction of the actual ship. The model includes laser cut board pieces, hardwood, brass, die-cast and fabric. For the assembly you can follow our complete full-color step by step guide in 4 languages, accompanied by real-scale drawings of the ship.