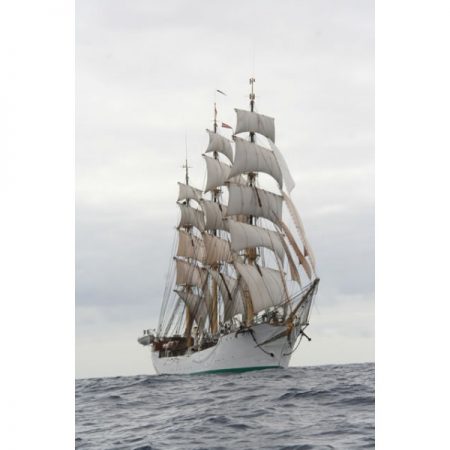 The Danmark succeeded the København, a five-masted barque which was lost mysteriously at sea at the end of 1928, as Denmark’s principal training ship.She was built to train officers of the Danish merchant marine. In 1939 she visited the United States to participate in the 1939 World’s Fair in New York City, but at the outbreak of hostilities in World War II, the Danmark was ordered to remain in US waters to avoid capture by the Germans. She was then based in Jacksonville, Florida and maintained with the help of the Danish American community there.

After the attack on Pearl Harbor the captain, Knud L. Hansen, offered the ship to the U.S. government as a training vessel. This offer was accepted, and the Danmark moved to New London, Connecticut to train cadets at the United States Coast Guard Academy there.

Training voyages continue to be offered, not only to Danes but also to those of any nation interested in learning the basics of seamanship on a large sailing vessel.

The ship was one out of seven ships that was used for filming in the British BBC TV-series Onedin Line (1971-1980).