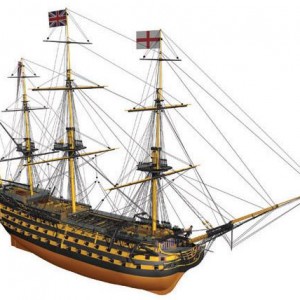 Billing Boats HMS Victory
HMS Victory was launched in 1765 at Chatham Dockyard and was commissioned in 1778. She continued in active service for the next 34 years which included her most famous moment at the Battle of Trafalgar, in 1805. In 1812 the Victory was retired from frontline duty and anchored in Portsmouth Harbor, on the south coast of England. For the next 110 years the Victory remained at her moorings in Portsmouth Harbor fulfilling a combination of practical and ceremonial roles. In 1922, amid fears for her continued survival, the Victory was moved into Portsmouth’s Royal Naval Dockyard and placed in No2 Dry Dock. Her Majesty’s Ship Victory is the only surviving naval warship that represents the skill of naval dockyard shipwrights, ship designers and the industrial ability of Britain during the mid 18th century.

Great kit for the Advanced Modeler, This is a double plank-on-bulkhead kit . All wooden parts are laser pre-cut. Fittings includes hardwood, brass, and copper pieces including etchings. Includes the baseboard.  Even though this kit is not something we recommend for the beginner we have seen it built by them. This kit excels in every phase of construction. Length 52.8 in, has a of Beam 18.1 in and a Height of 35 in. The scale is 1/75.