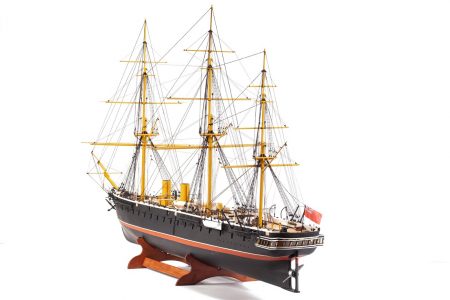 The Warrior was designed and built in response to an aggressive French shipbuilding program which saw the introduction of the first iron-clad warship La Gloire. The Royal Navy was determined to meet this challenge of supremacy and build a ship so superior in terms of quality, speed, size, armament and armour that it would be inconceivable to France that she could take Britain on in a sea battle. August 1, 1861, The Warrior was the largest warship in the world, at 9,210 tons displacement, she was fully 60% larger than the La Gloire. June 1862 she started active service in the Channel Squadron. In 1871 she was no longer the crack ship she had once been, and was downgraded to Coast Guard and reserve services. The Warrior was eventually converted to a floating school for the Navy and re-named Vernon III in 1904. By 1978, she was the only surviving example of the ‘Black Battlefleet’, the 45 iron hulls built for the Royal Navy between 1861 and 1877. (Source: http://www.hmswarrior.org)