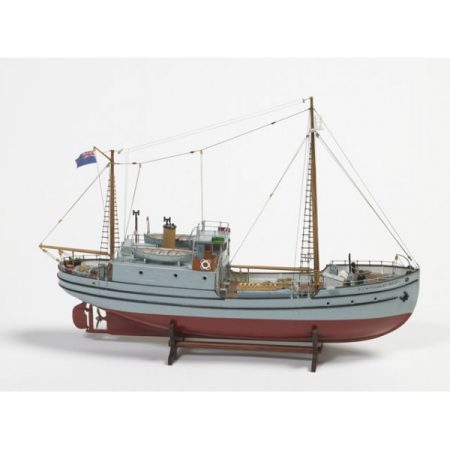 In 1940, the St. Roch set out from Vancouver on a secret mission through the Northwest passage. On this voyage, the St. Roch combined its normal supply mission with a deliberate assertion of Canadian sovereignty over the Arctic. Due to heavy ice conditions, the ship spent two winters frozen in Arctic waters, finally reaching Halifax on October 11, 1942. The voyage claimed the life of one crew member. The St. Roch was the first ship to complete the voyage through the Northwest Passage from Pacific to Atlantic. In the summer of 1944, it became the first ship to traverse the Arctic in both directions when it crossed the Northwest Passage again, this time from Halifax to Vancouver. The St. Roch was built in 1928 by the Burrard Dry Dock Company in North Vancouver.

This kit contains English translation instructions, all measurements in the booklet are in Metric.

All of the 600 Series Model Boat Kits (item numbers 600-609) include an easier way of building the hull. The hull is assembled in halves, on a table. This allows for easier assembly and is quite useful in learning plank-on-frame or plank-on-bulkhead construction! Once each half is done you join the two for a completed hull. Make sure you work each half in opposite directions so that when joined they marry up evenly!