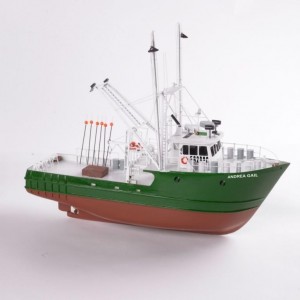 Here we have a Billing Boat -Andrea Gail

This is a series six concept model: Please look at how the keel would be built using this concept.
Great beginner kit

The Andrea Gail, an un-inspected commercial fishing vessel departed Gloucester Harbor, Massachusetts, September 20, 1991 with six crew members on board. The crew intended to make a fishing trip for swordfish in the area of the Grand Banks of Newfoundland, Canada. The vessel began its return voyage to Gloucester, MA. on October 26-27, 1991. On October 30, 1991, the vessel was reported overdue by the owner, Mr. Robert Brown. An extensive air and sea search was conducted utilizing U.S. and Canadian Cape Cod MA. However, the search did not locate the vessel or any of the crew members. The vessel and six crew members remain missing and are presumed lost at sea in a major storm, referred to as the “Perfect Storm” by a meteorologist and made famous by Sebastian Junger’s book (the book was later turned into a Hollywood movie). The sword fishermen were Captain William “Billy” Tyne, Robert “Bobby” Shatford of Gloucester, Dale Murphy and Michael â€œBugsyâ€ Moran of Bradenton Beach FL., David “Sully” Sullivan and Alfred Pierre of New York City).