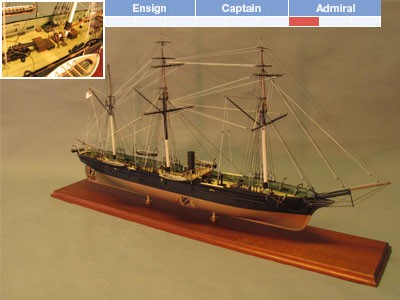 In 1862, John Laird Sons and Company of Liverpool, England built the screw sloop-of-war CSS Alabama for the Confederate States of America. Launched as Enrica, the vessel was fitted out as a cruiser and commissioned as CSS Alabama on 24 August 1862.

For nearly two years under Captian Raphael Semmes, Alabama cruised the whaling grounds around the Azores, he shipping lanes along the eastern seaboard of the U.S., the Carribean, the Brazilian coast, along South Africa, the Indian Ocean, South China Sea, and the Bay of Bengal, capturing 447 vessels, including 65 Union merchant ships, and sinking the U.S.S. Hatteras. During this time she took 2,000 prisoners with no loss of life. Until the engagement with Kearsarge, she lost not one man to accident or disease aboard the ship.

The CSS Alabama, was sunk by the USS Kearsarge in the spectacular Battle of Cherbourg off the coast of France on 19 June 1864.

Be the first to review “Bluejacket CSS Alabama” Cancel reply