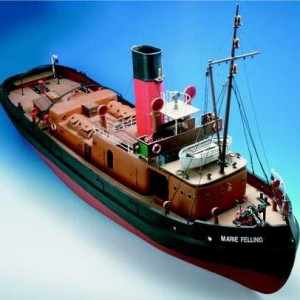 The Marie Felling was built by Earls of Hall and launched in 1928. Designed by the same team as the Imara, she was a Crown Colony Contracts vessel and judging by the margin notes of the contract, gave rise to the many improvements incorporated in the later Imara, especially with regard to accommodation. Both were designed for the same type of harbour work. From the deck layout up, the Marie Felling is an unusual and appealing vessel. From the single lifeboat carried cross ship on the sub deck atop the forward saloon and the raised bridge on stilts, not to mention the cross passage through the single superstructure, the massive plain funnel and open funnel deck all combine to give this vessel a unique charm.