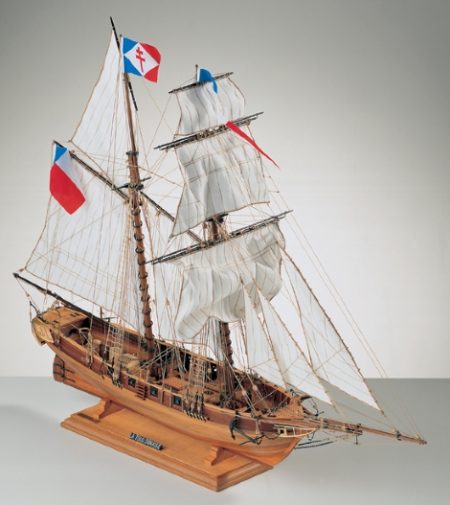 The schooner Toulonaise was launched in Toulon, France on August 13, 1823. The ship served in the Spanish War under Captain Jpoursin. She was stationed at Barcelona and sailed to Cadiz, where she took part in the bombardments of the port. Corel’s model is based on drawings taken from a large size model in the French national maritime museum, le Musée National de la Marine, in Paris.

Corel’s Toulonaise is a plank-on-bulkhead kit, featuring pre-cut structural parts. Planking, deck furniture, masts and yards are made woods such as African walnut, mahogany, beech, poplar and tanganyka. Deadeyes and blocks are all pre-finished hardwood. Brass, copper and cast metals are used for carronades, falconets and other hardware. This model has the new instruction plans which has a step-by-step plan with many diagrams. This model can be made by even a beginner in wood ship building.

Be the first to review “Corel Toulonaise” Cancel reply