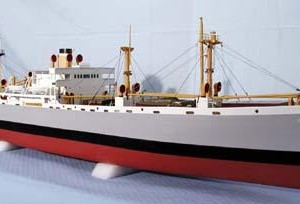 Please note that this kit includes Motors and couplings from Deans. All you need are the servos, speed controller and radio to complete this kit.

Please let us know if you prefer to just build a static model and we can adjust the pricing for the motors and couplings included
.
The scale of this kit is 1/96, LENGTH 54.5â€ and has a BEAM 7.3â€

Built by Joshua Henry Ironworks, Sunnyvale, California. In 1940, Great Britain stood alone, fighting the Axis Powers, and after nine months of war had already lost one million tons of shipping that had been sent to the bottom of the Atlantic by German U boats. The U boats were sinking ships faster than the British yards could build them.

In September 1940, a British Merchant Ship-building Mission, headed by a representative of J. L. Thompson & Sons of Sunderland, was sent to the U.S.A. with the sole motive of ordering ships to be built there. To speed up possible production, they brought with them the Thompson designed “Dorrington Court” plans, and so it was, with slight modifications that the Liberty Ships came to be built.

A total of 2,700 ships were constructed and whilst “built by the mile and chopped of by the yard” they are credited with saving not only Great Britain, but in the Allied cause, the whole world from disaster. The model shown is of a standard armed cargo ship serving with the United States Navy.

Kits hull is Made of fiberglass , Has lots of cast metal fittings and detailed printed sheets. Rolled plans and instruction booklet included. As always Deans Marine makes one of the best kits in this industry.

Please note the box dimensions are as follows: 55″ in length 12 in width and height of 9 inches. So the shipping has to be by UPS or a freight carrier only.