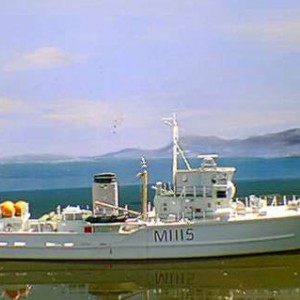 The “Ton” or Coniston class of minesweepers were constructed as minesweepers for the R.N and other navies between 1951 and 1959 making them one of the most numerous class of ships to serve in the R.N.

The Bronington (ex Green Beetle ) was constructed by Cook Welton & Gemmel at Hull and Beverly. She was laid down in 1951 and launched in 1954.

In 1965 he was converted to a mine hunter at Rosyth (as she is modeled by us) and stationed with the 1st M.C.M.S. In 1974 she was refitted at Gibraltar and then stationed at Rosyth with the 1st M.C.M.S. The Lt the Prince of Wales was in command from 9/2/76 until she was visited by H.M. the Queen and Prince Philip whilst at the Tower Pier in London.

Details of the kit: