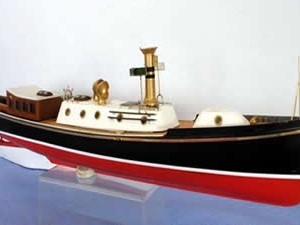 Dean’s Marine Response. You will need the Motors, couplings, servos, speed controller, and radio to complete this kit. Sorry, we do not carry these products nor make recommendations.

The steam Picket Boat was developed from the 63ft craft that were carried by Capital ships from 1863, that were launched and carried out attacks on the enemy fleet. They were never used in such a role but became maids of all work for ships. They could be armed with a 3pd gun or a Nordenfelt machine gun, The 56ft was the most numerous and became a classic of its type. After service with the Royal Navy the craft were constructed with the best quality and some even survive today in working order as does the version which has been restored to its original condition and is based at this time on the Thames river.

Details of the kit

Details and construction are similar to the rest of the models comprising of GLASS FIBRE HULL and BULWARKS, vac formed plastic s/structure. metal & resin fittings, plus rudder, props & shafts. A Full size colour plan with embedded colour pictures & comprehensive instruction book including details on powering this model. The deck planking is preprinted on self adhesive vinyl to ease construction All kits in the range have outstanding on the water performance as part of the design. Scale 1/36 Length 460mm Beam 80mm

Be the first to review “Deans Marine Response” Cancel reply