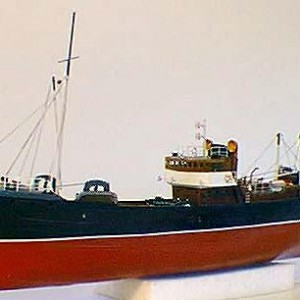 This 1/96 scale addition to the Compact kit range is the H.M.S. ROYAL MARINE in her outfit after her service in WW11. She was converted to a working trawler a fairly major conversion as she was stripped down to her bare hull and rebuilt, after which she was based in Fleetwood for a number of years. She was later modified again (slightly) and served the rest of her days in Hull. The military class of Naval Trawlers were constructed by Cook Welton & Gemmel LTD of Beverly who launched 75 Trawlers to Royal navy designs based on commercial ships.

The Royal Marine was ordered on 20-3-43 as part of the 43 Trawler program. These ships had a displacement of 750 tons and were powered by one shaft steam reciprocating engine of 1.100 i,h,p giving a top speed of 11 knots.
Their Weatherly qualities always of the highest order, often resulted in their being the only form of escort operative in bad weather and they could keep the seas when even destroyers were compelled to seek shelter.
Royal Marine survived the war and was sold out of navy service to become the SISAPON in 1946. She was converted to a deep water trawler with diesel engines for Icelandic fishing.