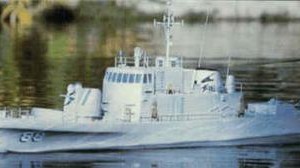 Dimensions:Length: 29.6″ Height: 23.8″ and has a beam of 12.9″ The Scale is : 1/35. The U.S.S. Crockett was one of the seventeen gunboats in the Asheville Class. This class had the distinction of being the first group of Navy Ships to be powered by a gas turbine.

The Crockett was capable of a top speed of 50 knots but more impressive still was the fact that she could accelerate her 230 tons from 0 to 40 knots in 60 seconds. The Crockett, stationed in South Vietnam was designed for coastal patrol, blockade reconnaissance, and support missions. But rest assured when duty called, the crew of the U.S.S. Crockett could get there in a hurry.

The Dumas model of the Crockett is a builders boat. She features balsa plank over die-cut mahogany frame construction for the hull, and conventional die-cut construction for the superstructure. #2105 is an optional deck hardware kit with more than 80 cast fittings. Included in the deck hardware are all the armaments needed to send her in to battle.

#2341 is the twin screw running hardware kit used to drive the Crockett. It has everything needed to complete your drive line except motors. Use two Dumas motors #2004 for 6 volt power.

If you are a military enthusiast you will certainly want to try your hand at the Dumas U.S.S. Crockett.Length 51 inches Beam 7-1/2 inches Scale 5/16 in. to 1 ft.To complete your model It requires the following:Power 2 Dumas #2004 6 volt motors – Not Included – Running Hardware #2341 for twin screws turning opposite directions – Not included – Deck Hardware #2105- Not included.

*****Please note that these items are not always in stock, express shipments cannot be guaranteed. Orders can take up to an additional week to process********

Be the first to review “Dumas USS Crocket” Cancel reply