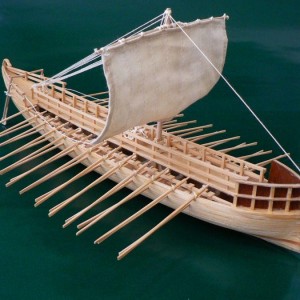 The model represents the Greek bireme from the 6th Century before Christ. The garrison force was created by 50 oarsmen, who were sitting in two rows one above another (on each side 25) and by about another 10 soldiers. In the event of struggle the oarsmen left the oars and skulls and fought with the shields and swords. The protrusion on the forward of the ship served for sinking of the enemy ships, the boat strove to crash by that into the hull of the adversary boat. The ship was handled by two rudders on the stern. The main drive of the ship was oared, the sail served only for longer lasting voyages. During the battle the sail together with the mast were down swept on stern and the ship was driven entirely by oars. Dusek Ship Kits.