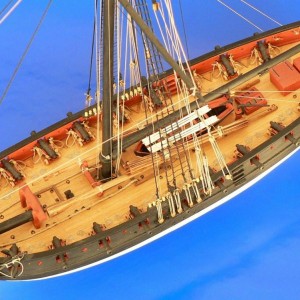 The cutter LE CERF was built after the plans of well known French ship designer Denys. The CERF was launched in March 2, 1779 in Saint-Malo dock-yard. Command of the ship was confided to ensign Varages. The ship was equipped with eighteen 6pdr guns. Total number of ship crew was from 155 to 194 persons (this numbers involve officers, seamen, gunners and mariners). The CERF participates in several fighter actions with British during the American War of Independence. First battle between the CERF and British ships (two cutters of fourteen and sixteen guns) occurred in the night of June 21-22, 1779 at southwest of the island of Yeu. During this battle a stem of the Cerf was quite badly damaged and total seventeen men were put out of action. Later after necessary reparation the CERF was made part in the fleet of J. P. Jones, a Captain of the United States (well known Commander of the U.S. ship BONHOMME RICHARD). The CERF participated on a combat operation near the Irish coast. The last battle where the CERF took a part went ahead on February 9, 1780, near the Azores Islands. The CERF fought with British 24 guns privateer. The CERF was badly damaged during this battle and in consequence of these damages was in a short time inactivated from service.

Be the first to review “Dusek Le Cerf” Cancel reply