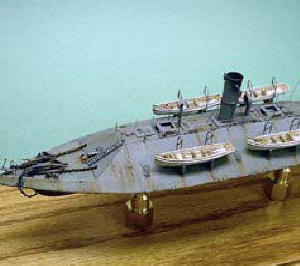 CSS Chicora, a Richmond class ironclad ram, was built at Charleston, South Carolina. Commissioned in November 1862 under the command of Confederate Navy Commander John Randolph Tucker, she (Chicora) was employed in the defense of Charleston for most of the rest of the Civil War.

In her first major action, on 31 January 1863, Chicora and her sister ship Palmetto State attacked the U.S. Navy blockading force off Charleston. They disabled the gunboats Keystone State and Mercedita, forcing the latter to briefly surrender, and engaged other Union warships before returning safely to port. On 7 April 1863, when U.S. Navy ironclads attacked Fort Sumter, and later in the year when other fortifications were assaulted, Chicora operated in defense of the Confederate positions. She also furnished the initial crewmen for the submarine torpedo boat H.L. Hunley, five of whom were drowned when the submarine accidently sank on 29 August 1863. CSS Chicora remained active until 18 February 1865, when she was destroyed to prevent capture when Charleston was evacuated.