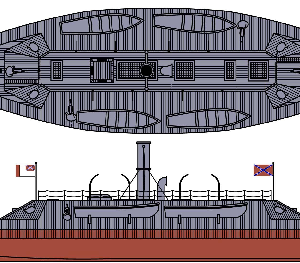 CSS Palmetto State, a Richmond class ironclad ram built at Charleston, South Carolina, was commissioned in September 1862. On 31 January 1863, in one of the Confederate Navy’s few successful efforts against Union blockading forces, she joined her sister ship Chicora in an attack that disabled USS Keystone State and USS Mercedita. Though the blockade was not broken, it was clearly endangered by the two Confederate ironclads, neither of which was much injured in the action. Although the Chicora and Palmetto State are siste ships, the Palmetto State has one very distinct feature that differs her from the Chicora. Her casemate has angled facets on each corner allowing her a higher and more flexible rate of fire.

When U.S. Navy ironclads attacked Fort Sumter on 7 April 1863, and when some of Charleston’s defending batteries had to be evacuated on 6-7 September of that year, Palmetto State assisted in the successful Confederate operations. For most of the rest of the Civil War, she remained active in the Charleston vicinity. CSS Palmetto State was destroyed on 18 February 1865, when the city was evacuated.