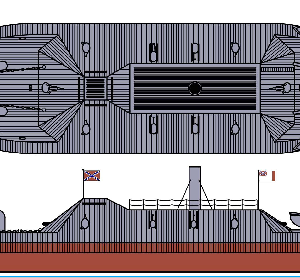 CSS Tennessee, a 1273-ton ironclad ram, was built at Selma, Alabama. Launched in February 1863, her outfitting was completed at Mobile, where she was commissioned in February 1864. As flagship of Admiral Franklin Buchanan, she was by far the strongest unit of the naval part of the defenses of Mobile Bay.

On 5 August 1864, Tennessee battled against Rear Admiral David Glasgow Farragut’s fleet as it steamed past Forts Morgan and Gaines into Mobile Bay. Though she was able to inflict some damage on the Federal ships, Farragut successfully entered the Bay and anchored beyond the reach of the Confederate forts’ guns. Admiral Buchanan then took his ship up toward the Union warships, engaging them in an intense battle that ended with Tennessee surrounded by her enemies and battered into surrender.

The former Confederate ironclad was promptly taken into the Union Navy as USS Tennessee. With her combat damage quickly repaired, she was employed during operations to capture Fort Morgan later in August. In the autumn of 1864, Tennessee was sent to New Orleans, Louisiana, for further repairs. She subsequently served with the U.S. Navy’s Mississippi Squadron until after the end of the Civil War. Decommissioned in August 1865, USS Tennessee was sold for scrapping in November 1867.