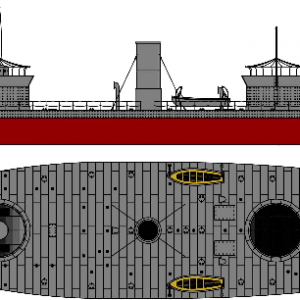 The USS Onondaga is a medium skills level model to construct. While the model itself is easy to build, the extensive photo etch sheet will require someone with experience working with photo etched parts to apply them. The kit features resin and white metal cast parts, decal flag, photo etch parts, illustrated instructions.

USS Onondaga , a 2592-ton twin-turret monitor, was built at Greenpoint, New York. Commissioned in March 1864, she spent her entire active career with the James River Flotilla, covering the water approaches to Richmond, Virginia, during the Civil War’s last year. While on the James, she was involved in several engagements in June, August and December 1864 and in January 1865.

Onondaga was decommissioned at Philadelphia, Pennsylvania, in June 1865. In an arrangement approved by the Congress, she was sold back to her builder in March 1867 and immediately resold to France. The monitor subsequently had long service in the French Navy.