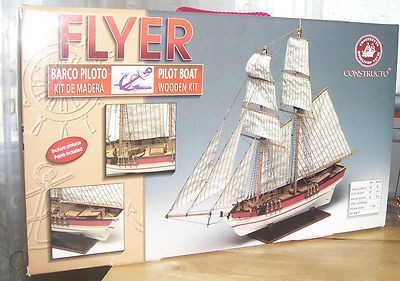 Two-masted topsail schooners like Constructo’s Flyer were typical 18th and 19th century ships. They were used as merchant ships, light warships, and for coast guard activities. Many were granted privateering commissions by the government, allowing them to take or sink ships belonging to the enemy.

This kit comes complete with a pre-carved solid wooden hull, sailcloth and paints, as well as metal and wood fittings, and instructions.

This is a replica of one of the many schooners built in Baltimore to cover the tea routes. The majority were subsequently used coastal patrol during the War of 1812.