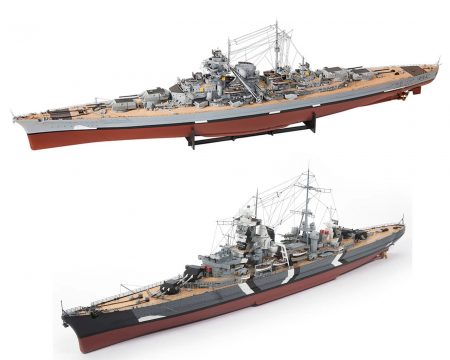 WOODEN MODEL SHIP KIT BY AMATI MODEL
Launched in 1939, the battleship Bismarck was Germany’s latest weapon in its war against the Allies. The ship was armed with a main battery of eith 15-inch guns mounted in pairs in four turrets. Her secondary armament consisted of twelve 5.9-inch guns, sixteen 4.1-inch guns, sixteen 1.5-inch guns, and twelve 20mm anti-aircraft guns. The ship carried a crew of 2000 men, displaced over 50,000 tons fully loaded, and measured over 800 feet long, overall.

Bismarck is latest kit from Amati, just released for Summer ’21. At 1:200 scale, this is a BIG model, over 4 feet long! The kit features a single-planked wooden hull of plank-on-bulkhead construction, with laser cut parts for the keel and bulkheads, as well as for the deck structures.

Being a wooden model kit, the deck is, of course, real wood, just like the real ship. This is a massive kit, not just in size, but in the quantity of materials. 16 laser-cut plywood sheets, plus more than 2200 photo-etched brass parts! This a kit that will test your skills. Complete this challenge, and you’ll have one of the most amazing models on display anywhere.

WOODEN MODEL SHIP KIT BY OCCRE
The Prinz Eugen was a heavy cruiser built for the German Kriegsmarine. Launched in 1938, the ship entered service shortly after the outbreak of World War II. The Prinz Eugen was one of five Admiral-Hipper class heavy cruisers, armed with a main battery of eight 8″ guns, mounted in four twin turrets. The ship’s secondary battery consisted of twelve 105mm guns, twelve 37mm guns, eight 20mm guns, and a pair of triple torpedo tubes.

Soon after she entered service, the ship was sent to join the newly completed battleship Bismarck in the Baltic as part of Operation Bheinübung, to break out into the Atlantic to destroy Allied shipping. During the operation the two ships encountered British battlecruisers at what became known as the Battle of the Denmark Strait. It was during this battle, that the ships sank the battlecruiser Hood. After the engagement, the Prinz Eugen managed to break away to conduct attacks on Allied shipping.

Eventually, the ship was assigned to Operation Cerberus to support german operations in Norway, and later to operations in the Baltic, where she served until the end of the war.

At 1:200 scale, OcCre’s Prinz Eugen kit is a massive wooden ship model kit that measures just over 42″ long when complete. It is an advanced level kit that includes over 800 different pieces to enjoy building the model. Parts include precision laser-cut wood, detailed castings, and high quality photo-etched brass.

The Prinz Eugen is a wooden kit to be assembled.