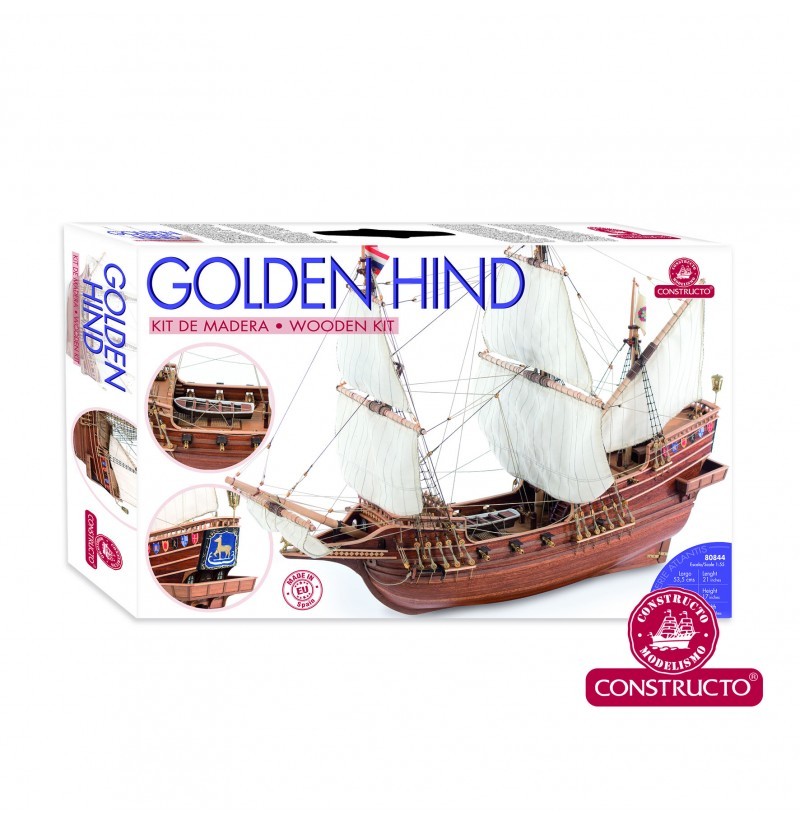 The kit is 1:55 scale. Hollow hull with false keel and laser cut ribs. Pre-cut pieces in wood and brass turning, castings and brass engraving for details. Presented in a luxurious box with all components sorted and ordered for easy localization. Assembly instruction book in 7 languages: Spanish, English, French, German, Dutch, Italian and Portuguese. Detailed step-by-step instructions of mounting. It also includes 3 plans with all the views and details necessary for its construction.

The Golden Hind, the ship with which Sir Francis Drake made the trip around the world between 1577 and 1580. Its original name was Pelican.

On November 15, 1577 Sir Francis Drake, with the approval of Queen Elizabeth I, departed Plymouth aboard the Pelican along with four smaller ships. The expedition landed in South America in August of 1578 arriving at the feared opening of the Strait of Magellan. This was where Drake renamed the ship Golden Hind, in honor of his patron Christopher Hatton, whose coat of arms had a golden hind. The crossing of the strait was difficult with only Drake in the Golden Hind manageing to reach the Pacific where the true objective of the expedition was revealed, to attack the Spanish colonies on the west coast of South and Central America.

On May 1, 1579, off the coast of Ecuador, the Spanish galleon, Nuestra Señora de la Concepción, was captured, with the largest treasure captured until that date. The transshipment of the six tons of the treasure lasted six days and on the 26 of September 1580 arrived at Plymouth with only 56 of the 80 original crew. Despite his pirate conduct on the voyage, Queen Elizabeth I personally bestows upon him the title of knight. The queen’s treasury part amounts to £160,000, enough to pay off all the external debt and get £40,000 for other projects. It was arranged that the ship be preserved as a symbol of the services rendered by Sir Francis Drake to the country. and remained moored in the port of Deptford for almost 100 years until it rotted.