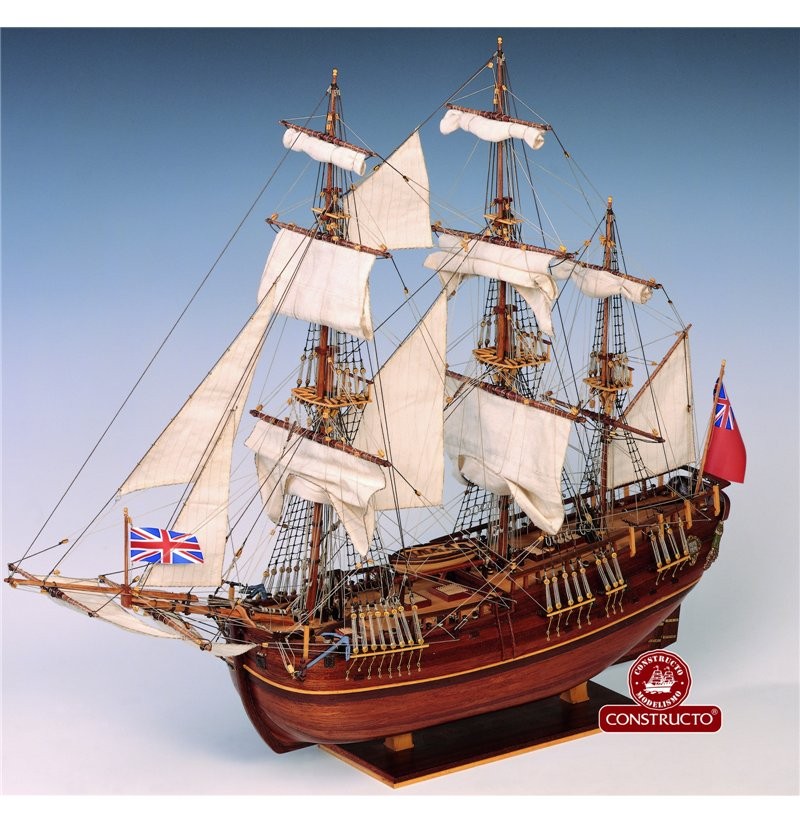 This is a plank-on-bulkhead wooden model ship kit with false keel and ribs laser cut. Pre-cut pieces in wood, turned brass and cast parts for details. Presented in a luxurious box with all the components classified and arranged for easy location. Assembly instruction book in 7 languages: Spanish, English, French, German, Dutch, Italian and Portuguese. Detailed instructions with pictures of the assembly step by step. It also includes 5 sheets of plans with all the views and details necessary for its construction. A set of pre-sewn sails are included in the kit.

The Endeavor, is known for the expedition, whose main purpose was to observe the passage of Venus before the Sun, which would take place in June 1769 and which was supposed to be visible on the island of Tahiti. This event was considered of vital importance to measure the distance from the Earth to the Sun. History In 1767 the Royal Society of London asked King George III to send a ship to the southern seas, to observe the passage of Venus before the Sun. This must be robust, with good load capacity and good maneuverability. The boat selected for such a company was the Endeavor, a coalfish modified to house the crew, scientists and necessary supplies taking advantage of its large cargo capacity. Commander of the expedition was Lieutenant of Ship James Cook. On August 26, 1768, the Endeavor sailed from the port of Plymouth, embarking on the route to Cape Horn and arriving in Tahiti in April 1769. On June 3, the astronomical phenomenon that motivated the expedition took place. James Cook continued to New Zealand, where he mapped the coasts, concluding that it was not a new continent and that the archipelago consisted of two main islands. Later it went to Tasmania, but a strong storm diverted it of its course and they descried the coasts of Australia in April of 1770. The expedition headed north exploring and cartografiando the Eastern coast Australian. On July 13, 1771 they arrived in England, passing James Cook into history as a great explorer and cartographer.