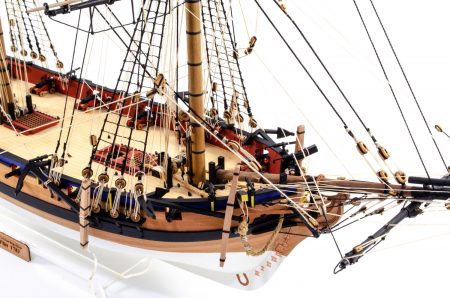 Walnut dowel for mast and yards

Exact scale model of one of the new class of Royal Navy brig-sloops. To further increase the quality of their products, Vanguard Models has also invested in a new laser cutting machine which vastly decreases any blowback from the laser, reducing any heat effect further.

Note:some gallery images may show sheets from the Master Shipwright edition, but it is only the material which will be different in the standard edition.

The Flirt was ordered together with Speedy in 1781 and both built by Thomas King, a private shipyard owner based in Dover with Flirt being launched on 4th March 1782, three months before Speedy.

The Flirt/Speedy class of brig-sloops were the second class built to the new flush decked brig-sloop designs, the first being the Childers class of 1779 (Childers was in the very first action that led to the long war with France from 1793-1815, after being fired upon on 2nd January 1793 from a French battery based in Brest, a cannon ball from the battery being taken to the Admiralty in London). Both the Childers and Flirt/Speedy class were almost identical, and it would be difficult to tell the differences. Both were around the same dimensions, mast plans and armament and crew compliment. They also shared the same very graceful lines, more cutter-like than brig. These early flush decked brig-sloops had a graceful sheer and steeply raked stern, unlike the later ‘mass-produced’ Cruiser and Cherokee classes.

The term ‘Brig-Sloop’ means that she was a two-masted vessel, and on the Navy List sloop was a term given to a vessel which was commanded by an officer with the rank of master and commander. Flirt was 207 tons, the length of her upper deck was just over 78 feet and her breadth was 25 feet, 8 inches. She had a crew of between 84 men and 6 officers, with only two of the officers being commissions, the commander and his lieutenant.

Her armament consisted of 14 x 4-Pounder carriage guns and 12 x half-pounder swivel guns, but posts for 20 guns, as the swivel guns could be taken out of their posts and moved and placed in another post.

Flirt and Speedy were completed too late to see any significant service in the American War of Independence. She then spent most of the years of peace in British waters. She sailed to Jamaica in 1791, but was laid up in Deptford in November 1792, and did not return to service before being sold in 1795. Daniel Bennett purchased her, had her almost rebuilt, and then employed her as a whaler in the Southern Whale Fishery. A French privateer captured her in 1803 as Flirt was returning to Britain from a whaling voyage.