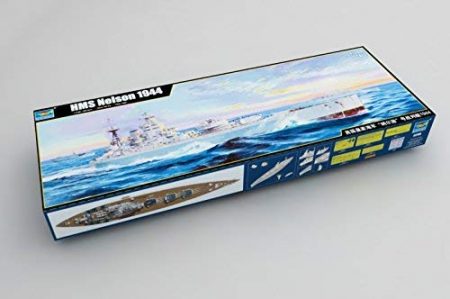 HMS Nelson 1:200 Scale Battleship
The HMS Nelson was one of two Nelson-class battleships built for the Royal Navy between the two World Wars. The Nelson class was unique among other British battleships because they were the only ships carrying a main armament of 16-inch (406mm) guns and the only ones to carry all the main armament forward of the superstructure. This was a result of the limitations of the Washington Naval Treaty. Commissioned in 1927, HMS Nelson served extensively in the Atlantic, Mediterranean and Indian oceans during World War II. She was decommissioned soon after the end of the war and scrapped in 1949.
________________________________
HMS Nelson 1:200 Scale Battleship Product Details:
Scale: 1/200
Length: 42.7”
Beam: 6.3”
Parts: 1260+
– Requires paint and glue for assembly
– Illustrated instructions and paint profile
– One-piece slide-molded hull
- 18 sprues - One-piece deck
- Includes display stand
– 8 photo-etched frets
– Detailed gun
– Metal parts
– Clear parts - Decals