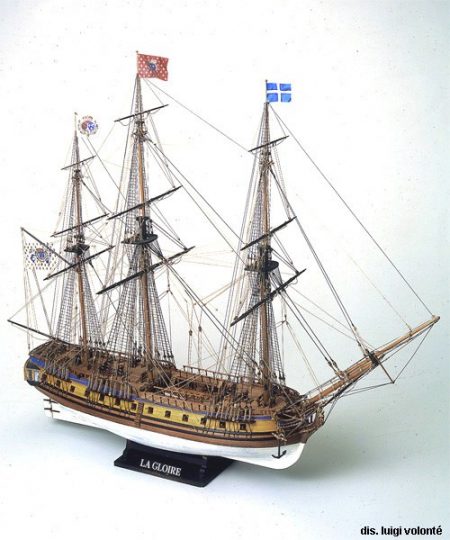 Classic frigate, belonging to the French Navy at the end of the XVIII century. Equipped with 26 12-pound guns on the battery deck, besides 4 6-pound guns and 4 carronades of the main deck. La Gloire was planned by the shipbuilding engineer Guignace, and was launched at St.Malo in 1778. The model is the reproduction, of the ship during the first year of navigation, with the bottom painted white. One year later, in June 1779, like with many other ships, the submerged part of the hull was sheathed with copper plates to protect it from corrosion.

This is a double-plank-on-bulkhead Kit. All woods are laser cut for complete accuracy. The ornamental fittings are made of brass, cast metal and walnet. There are Gilded cast metal figurehead and nameplate, metal anchors, three wooden ship’s boats. Its comes with four thickens of rigging, flags, and wood for display base which complete the kit. Thre are four large sheets of plans and clear instruction which will guide you through assembly.