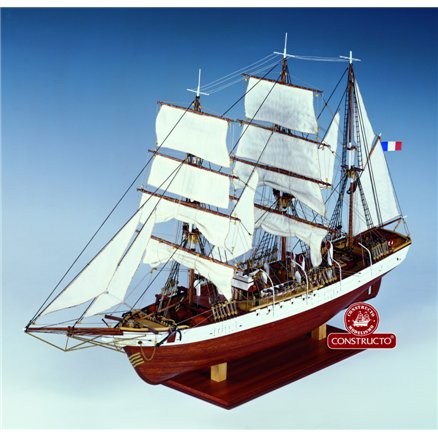 The Pourquoi Pas? IV was the fourth ship built for Jean-Baptiste Charcot, in Saint-Malo in 1907. It was a ship for polar research, equipped with an engine as well as three laboratories and a library. It was shipwrecked two miles off the coast of Iceland in 1936. The Pourquoi Pas? It was a three-masted vessel that began to be built in 1907. It was designed and built by François Gautier in the shipyards of his property, the hull was reinforced in its bow with sheets of steel and zinc. Doctor Jean-Baptiste Charcot was the thread of the famous professor Charcot. The sea fascinated him and he wanted to enter the naval school. However, he agreed to fulfill his father’s wishes and study medicine.

Whenever his parents tried to dissuade him from being a sailor, Charcot answered: “Marin, why not?” (“Marin, pourquoi-Pas?”), Which earned him the family nickname of “Petit Pourquoi-Pas?”, which he later used for most of his boats. In 1908 Charcot made his second polar expedition in the Pourquoi-Pas IV, returning in 1910 with numerous scientific discoveries. In 1912 it became the first school ship of the French Navy. From 1918 to 1925, Charcot was able to dispose of the Pourquoi-Pas? in several scientific expeditions through the North Atlantic, the English Channel, Mediterranean Sea and Faeroe Islands, studying mainly the lithosphere and geology. In 1925 Charcot lost control of the Pourquoi-Pas due to his age, although he remained as head of missions in numbers trips to the Arctic. In 1936 returning from a mission in Greenland he stopped in Reykjavik to refuel. On September 15 he left for Saint-Malo, but the next day he was surprised by a strong storm and was shipwrecked on the reefs of Álftanes. The entire crew dies except the main helmsman Eugène Gonidec.

The box contains the traditional construction kit. It is a wooden and metal boat, scale 1:80. Hollow hull with false keel and ribs laser cut. Pre-cut pieces in wood and brass turning, parts in cast iron and brass gravure for details. Assembly instruction book in 7 languages: Spanish, English, French, German, Dutch, Italian and Portuguese. Detailed instructions with photos of the step by step assembly. It also includes 3 plans with all the views and details necessary for its construction.