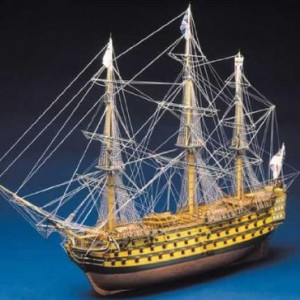 HMS Victory stands today as the world’s oldest commissioned warship. Still manned by Officers and Ratings of the Royal Navy, the Victory has seen over 220 years of almost continuous naval service. Best known for her role in the Battle of Trafalgar, the Victory currently has a dual role as the flagship of the Commander-in-Chief Naval Home Command and as a living museum to the Georgian navy. Launched in 1765 at Chatham Dockyard, the Victory was commissioned in 1778 and continued in active service for the next 32 years. In 1812 the Victory was retired from frontline duty and anchored in Portsmouth Harbor, on the south coast of England. For the next 110 years the Victory remained at her moorings in Portsmouth Harbor fulfilling a combination of practical and ceremonial roles. In 1922, amid fears for her continued survival, the Victory was moved into Portsmouth’s Royal Naval Dockyard and placed in No2 Dry Dock. Work then began on restoring the Victory to her ‘fighting’ 1805 condition. The Panart kit builds up into a fine model of the flagship to Admiral Lord Nelson.

She is a double plank-on-bulkhead kit, all parts are laser cut for a accurate fit and ease of assembly. Limewood under-planking is covered by a layer of flexible walnut strips for a smooth and beautiful finish. Masts and yardarms, deadeyes, blocks and gun carriages are made of walnut. The four life boats on the main deck are built according to traditional plank-on-frame techniques. The Figurehead, bow ornamentation are gilded cast metal. The stern uses laser carved wood this is well done with lots of detail. There are stamped brass gun port frames and brass lanterns, silk screened flags and cotton rigging . This kit includes 104 brass cannon. This kit has lots and lots of detail, a hard to keep item in our stock. There are Seven sheets of plans and a new, expanded instruction book wish will take you through every phase of the construction.