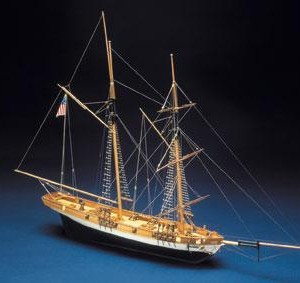 A square topsail American schooner, the Lynx was launched from the Baltimore dockyards in the early 19th century. Her commission was dated less than a month after the declaration war, on July 14th 1812. Built by Thomas Kemp to attack enemy merchant ships, she carried six 12-pounders and a crew of forty men. She took part in the Great Lakes Battle in 1812 and was captured by Sir John Warren’s squadron at the Rappahnnock river on 13th. April 1813. Lynx is a classic example of the Baltimore Clipper type.

Be the first to review “Mantua Panart Lynx” Cancel reply