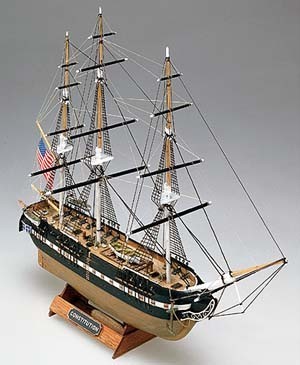 She was Launched on October 21, 1797, the USS Constitution has won every battle she’s ever fought – over 40 of them! She earned her nickname “Old Ironsides” after a sailor saw a cannonball bounce off her hull. Resting in Boston Harbor, she’s the oldest commissioned US warship. USS Constitution went through several restorations during her career. A major restoration between 1993 and 1997 prepared the frigate for her 200th anniversary. Workers restored the thick deck strakes and diagonal riders to strengthen the hull and make her seaworthy. They fitted fore, main and mizzen topsails, jib, flying jib, and spanker sails for the day when “Old Ironsides” would move under her own power once more. That historic moment arrived on July 21, 1997, when Constitution set sail from Marblehead Harbor to a point just one mile short of Halfway Rock. The five-mile cruise took one hour

Mamoli’s mini kits feature solid hulls that are pre-carved and perfectly shaped. They are well detailed, with fine grained wood dowels for the masts and spars and individual planking strips for the decks. Scaled fittings include metal parts, cotton rigging and silk-screened flags. One to one plans and simple instructions make these an easy 15 to 20 hour kit.

RECOMMENDED for ages 13 and up with adult supervision.