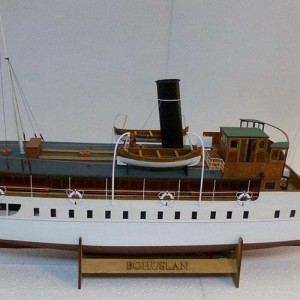 NCB35-1006 s/s Bohuslän, Nordic Class Boats The steamship s/s Bohuslän was built at Eriksbergs Warf in Gothenburg 1913. For more than 40 years the traffic route of Bohuslän was between Göteborg- Lysekil-Smögen-Gravarne (Kungshamn) on the swedish west coast. Later it was used as a ferry between Sweden and Denmark and between Sweden and Norway until it was taken of to be scapped in 1963. A number of enthusiasts decided to rescue it and restored Bohuslän to its original condition and is still running it in the west coast archipelago in the summertime. This kit is our most detailed yet and it also has a LED-lighting kit that is sold separately. Scale 1:45 Dimension in Inches: Height: 15.7 Width: 6.3 Length: 37.4