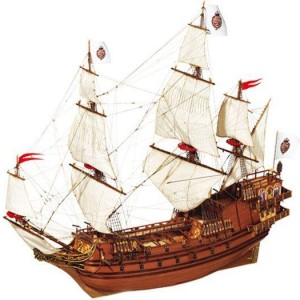 he ApÃ³stol Felipe was one of the six galleons built by MartÃ­n de Arana for King Felipe IV. It formed part of the “Silver Galleons”. This kind of galleon was used for transporting goods and treasures in the “Race for the Indies”. Its first voyage as a member of the galleon fleet was made in 1629, transporting treasures to Spain. It was an Admiral vessel of the Guardian Armada until 1633. It took part in the war of Brazil to recuperate Pernambuco and transported troops and money to Flanders, taking part in the battle of Dunas.

Be the first to review “OcCre Apostol Felipe” Cancel reply