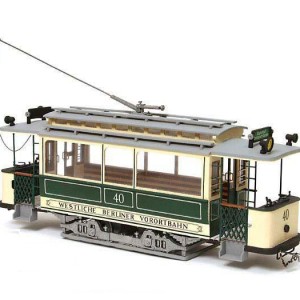 This vehicle was the oldest of the Berlin electric motor car trams, originally. It was no. 40 and operated in the West Berlin suburbs: “Westliche Berliner Vorortbahn”. It is the type of motor car trams called the “Neu-Berolina”, the use of which used to be widespread. In 1903 the side and front wall protectors were installed around the running gear, to avoid people being knocked down and dragged under the wheels.

With the unification of Berlinâ€™s municipal transport companies in 1920, this tram ended up belonging to the company “Berliner Strassenbahn”, no. 3851, later on denominated A 114. The tram was manufactured by BÃ¶ker & Cie, Remscheid and remained in service from 1901 right through to 1943. It was fitted with two 16. 7 kW AEG motors, was 28 feet long, 6 Â½ feet wide and 11 feet high, and weighed in when empty at 8.5 tons. It had sitting room for 20, plus another 12 standing.

Be the first to review “OcCre Berlin Tram” Cancel reply