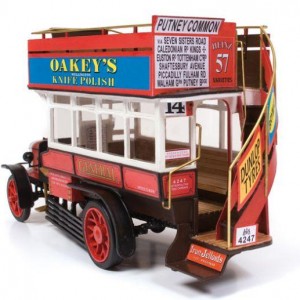 B-type buses were built in Walthamstow and replaced the previous X-type buses. The B-type had a seating capacity for 34 persons, 16 inside and 18 on the uncovered top deck and is considered to have been the first mass produced bus. The first of these buses began to carry passengers in 1911. By 1913 around 2500 had entered into service. This model was designed by Frank Searle, who was chief engineer at the LGOC. It had a wooden frame, steel wheels a worm drive and chain gearbox. It had a top speed of 16 mph, which was above the legal speed limit at that time of 12 mph; however some of these buses could reach speeds of around 30-35 mph in the right conditions. A total of 900 B-type buses were used to move troops behind the lines during the First World War. The Imperial War Museum still conserves one of these buses, B 43, which was affectionately know as Ole Bill after the contemporary cartoon character. The original B 340 is still conserved at the London Transport Museum in Covent Garden, and has been restored.

Be the first to review “OcCre Dennis Bus” Cancel reply