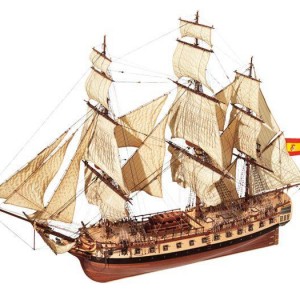 The frigate Diana was launched on the 10th of March 1792. It formed part of the series of frigates known as “Mahonesas”, as they had been built in the city of MahÃ³n. Thanks to its design, it could sail faster than its predecessors. It took part in the war against France along the Catalan coast although, during the war of Independence, its base was in Cadiz. As a member of the naval forces of Havana, it took part in battles against the corsairs in the Antilles and made various trips across the Atlantic. It was broken up in 1833 in the naval shipyard of Cartagena.

Be the first to review “OcCre HMS Diana” Cancel reply