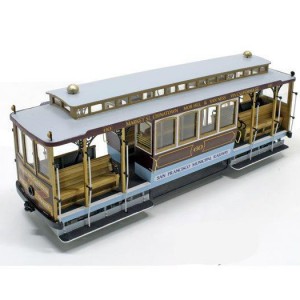 San Franciscoâ€™s cable cars are an authentic icon of the city. The first cable cars of this kind were brought into operation in London and, many years later, on 2nd August 1873, Andrew S. Hallidie introduced the first San Francisco cable car, on the Clay Street line. 136 years later these attractive vehicles are still running on the streets of San Francisco and form an essential part of the cityâ€™s daily life.

The system is based on a cable that is pulled at a constant velocity, along the whole route, by a stationery engine. The cable car starts to move when a device, called a grip, is engaged under pressure to the cable. By loosening this grip, and at the same time applying the breaks, the car is brought to a halt.

These days there are only two fleets still in service. One of these is Powell-Hyde and Powell-Mason, while the other is California Street. This model is a reproduction of car No. 60, of the California Street fleet, built by MUNI (San Francisco Municipal Railway) in 1998 this car was brought into service in 2002.

This car is based on the original model, built by John Hammond & Company for the California Street Cable Railroad Company, back in 1906. After the earthquake and the fire, of April 1906, it was rebuilt, at the relocated Hammond workshops and renumbered No. 16, later on, in 1957; it was renumbered again as No. 60, by MUNI.
The cable car was finally renovated again in 1968-69, at the MUNI Elkton workshops, using the original seats and roof.