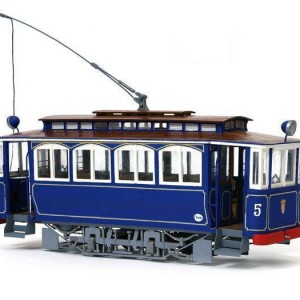 The â€œTramvÃ­a Blauâ€ tram is, at the present time, the oldest operational tramline in Europe, still running the same route as on the date of her inauguration back in 1901, in all that time never having ceased to provide a service to the public. From her inauguration, back in 1901, up to 1979 she belonged to Sociedad AnÃ³nima Tibidabo and then, in 1981, was taken over by the TMB (Barcelona Metropolitan Transport). The present model was built in 1904, has a capacity for 48 passengers, 32 sitting in crossways double seats, plus another 16 standing on her platforms. The actual tram weighs 9,650 kg, is fitted with two 45 HP electric motors, two breaks, one chain operated and the other electric, and is capable of reaching a top speed of 13.5 kph.

Be the first to review “OcCre Tibidabo Tram” Cancel reply