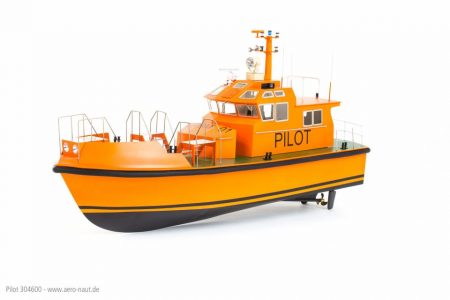 Pilot is a replica of a modern 20m pilot boat, which can be found on the Baltic and North Sea. Boats of this type are very maneuverable and also very fast at around 25-30 knots. Their job is to bring the pilots safely to the big ocean liners in all weather conditions.

With this model kit, both driving characteristics and driving behavior have been largely adopted. It is built on a modern planing boat hull and, like the originals, is also very maneuverable and with the appropriate drive equipment also very fast. In the space behind the steering position there is space for several crew members to be brought to their workplaces with an exit. The properties and driving behavior were incorporated into the model as far as possible.

All ABS parts are laser cut and can be glued together immediately after they have been put together. This kit is driven by two electric motors. The drives can be controlled individually (2 x Multi 25 controllers) or together via a Multi 40 controller (not included). It is controlled by two rudder systems and the wheelhouse is completely expanded. The photo etched parts of the dashboard allow the many fittings to be illuminated. All lamps of the model can be illuminated with 3mm LEDs.The two front headlights are very bright and give the model a striking appearance with the black rubbing strip. The searchlight is made of etched parts and is fully movable. The reflector and the LEDs are matched to each other and have enormous luminosity and light bundling. The model can be expanded according to your own ideas. There is enough space in the hull for your own special functions such as aileron, light or sound.

The Pilot kit contains: All laser-cut ABS parts required for construction, Depron slipway, fittings, rubbing strips, ship shafts, rudders, as well as the reflectors and LEDs for the headlights. The elaborate etched parts set made of nickel silver also included in the kit contains over 100 parts. This includes the stanchions, headlights, movable door hinges, the instruments on the dashboard and much more.