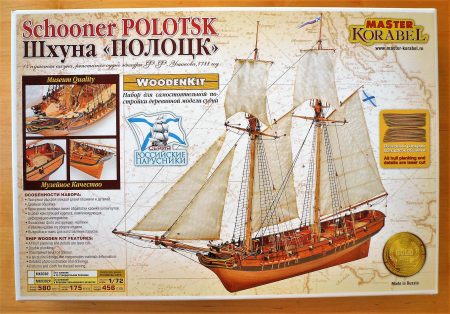 14 cannon schooner, repetitive vessel of the squadron of F.F. Ushakov

Schooner ‘Polotsk’ was built in Ragusa of Sicily in 1777.  The ship started its life in the Aegean sea.  Initially, the schooner was used as a privateer ship against Turkish trading ships.  However, having come short of speed to the military vessels off the enemy, the schooner became the loot of the Turkeish fleet.  After changing hands several times, this ship was eventually brought to Sebastopol by Anton Petrovich Alexiano, who became the first Russian captain of the ‘Polotsk’.  This ship would eventually become part of the F. F. Ushakov flotilla.  The function of thiis small vessel seemed simple, but the fate of the battle depended on it.

This is a “Plus Edition” kit, which includes the 75mm Ship’s Boat kit MK0102 and special pear wood blocks.