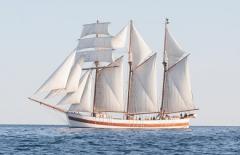 The Schooner Vega was built in Viken, Sweden, 1909 as a freight sail ship. First as a pure sailing vessel, until 1932 and later with engine assistance, she was working in the Baltic Sea until 1966. She was then taken to Stockholm and ended up by sinking as a wreck in 1985. Finally she was handed to the Society ”The Man and the Sea” from Gamleby who has lovingly restored Vega to it’s former beauty. The restoration process is always ongoing but every summer the Vega sails with passengers around Sweden. Vega has been a participant in the well known Tall Ship Race for several years and in 2014 Vega claimed first place in it’s class.

Our kit is modeled after the Vega and even if it’s not a 100% replica it is a very nice sailing ship which will look great in any home.

The kit is delivered complete with laser cut wooden parts, drawings and fittings but glue, paint and tools are not included.