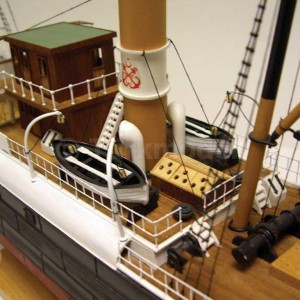 The SS Panderma was a passenger and cargo steamer built in 1878 in Paisley, Scottland. The ship’s first owner, Dansey and Robinson Company, originally named it ‘Trocadero” and used for 5 years. In 1883, the ship was sold to Greek ship owner H. Psicha Preaus, who renamed the ship “SS Kymi”.

In 1890, the last owner sold it to another Greek ship owner, Cap. Andreadis. The ship sunk at 1891 and was brought up in the same year. It was sold to Istanbul Rama Derasimo and recorded to Istanbul port. In 1894 she started to work for the Ottoman Transportation Authority. Her name was changed to SS Panderma and later to SS Bandirma (Turkish for Panderma), and served as a mail ship on the Sea of Marmara.

The ship completed a historical mission on May 19, 1919, when the founder of the modern Republic of Turkey, Mustafa Kemal Ataturk, arrived at Samsun from Constantinople, now Istanbul, by this ship and started the Turkish Independence War against the occupiers. The ship was scrapped in 1925 at Golden Horn.