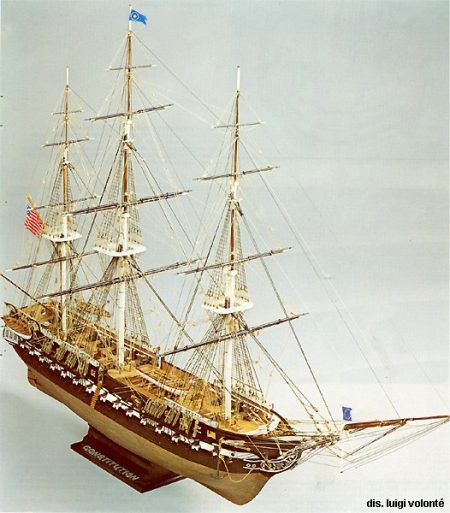 U.S.S. Constitution, American frigate with 54 guns, was launched on 21st of October 1797. It had bigger dimensions, sails and equipment than the contemporary ships of the same class. Its strong construction earned ita’s the name of “Old Ironsides”. It was protagonist of various episodes of naval battles, the most famous of which was the victory over the English frigate “Guerriere” on the 19th August 1812, during the war against Great Britain.

Great kit for the intermediate builder, This is a accurate represetation of the constitution. this kit uses using woods as walnut, beechwood, tanganyka and mahogany for its strips and decks. She has 32 burnished metal cannon and 20 carronades and a golden eagle on her stern,Ot comes with three thicknesses of rope for lifelike rigging. Ten sheets of plans and instructions . All laser cut wood are pre-cut and are numbered for a easier build.

Be the first to review “USS Constitution by Mamoli” Cancel reply