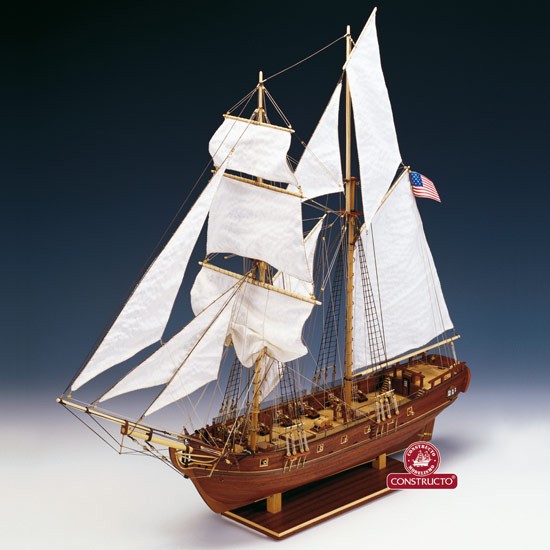 Near the end of the 18th century, the US Navy had only the schooner Enterprise as a war vessel. On 17 December 1799, Enterprise departed the Delaware Capes for the Caribbean to protect United States merchantmen from the depredations of French privateers during the Quasi-War with France. Within the following year, Enterprise captured eight privateers and liberated 11 American vessels from captivity, achievements which assured her inclusion in the 14 ships retained in the Navy after the Quasi-War. She also participated in the siege of Tripoli in 1801 and underwent major repair in Venice in 1805 then again in Washington in 1811 where the rig was changed to a brig. The Enterprise and Constitution captured the pirate ship Matisco, and in 1813 she captured the English brig Boxer. She was sunk in the West Indies in 1823.

ENTERPRISE, wood and metal construction kit. Traditional construction, frames hull. Presented in a luxurious box with all the pieces classified and arranged so they can be found easily. With a detailed instruction manual, with step-by-step photos of the entire assembly process. It also includes several drawings with all of the views and details necessary for assembly. A set of sewn sails included in the kit.

ENTERPRISE, a complete kit which will provide hours and hours of entertainment enjoying building. To end up having a work of art in the house.