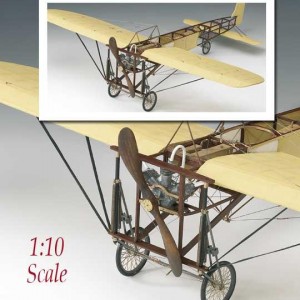 “England’s isolation has ended once for all!” So wrote on English newspaper the day after Louis Bleriot flew across the English Channel from France. The French aviation pioneer in his modified type XI monoplane, took off from Les Baraques near Calais at 4.41am on July 25 1909 and landed at 5.17am in Northfall Meadow near Dover.

The Bleriot XI made its debut at the Paris Salon de d’Automobile et de l’Aeronatique in December 1908, in the aeronautical section, along with two other Bleriot planes: the type IX and the type X. In October 1908 the London Daily Mail had offered a prize of Â£ 1,000 to the first aviator to cross the Channel in either direction. Bleriot’s exploit was proceded by the unsuccessful attempt of another aviation pioneer: Humbert Latham. The Bleriot XI had an outstanding career. Apart from its sporting activities it was also the first plane sold to the French Army and the first to serve during military operations.

The construction kit has all the wooden and laser cut parts, fabric cover for the wings, metal and brass parts and photo-etched metal parts.

Be the first to review “Amati Aereo Bleriot” Cancel reply