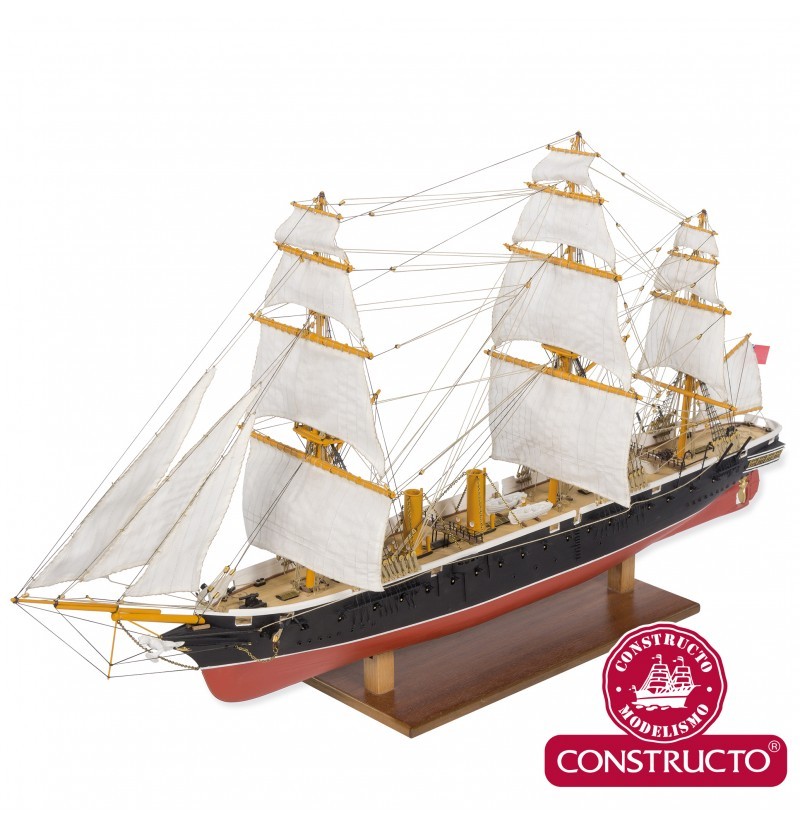 This is a plank-on-bulkhead wooden kit with laser-cut structural parts. Pre-cut pieces in wood, turned brass, and cast iron parts for details. Presented in a luxurious box with all the components classified and ordered for easy localization. Instruction book in 7 languages: Spanish, English, French, German, Dutch, Italian and Portuguese, includes photos of the step-by-step assembly. It also includes 4 plans with all the views and details necessary for its construction.

The HMS Warrior, was the first British ironclad battleship. The first ship of this style was the French Gloire, put in service by the French Navy in 1859, which provoked that the British navy also began to build them. Currently properly restored it is located in dry dock in the port of Portsmouth as a museum.

The Warrior was built by Thames Ironworks and Shipbuilding Co. LTD at Blackwall Shipyards. Construction commenced on May 25, 1859 and the ship was launched on December 29, 1860. Built as the fastest and the best armed ship of her time, in less than 10 years was obsolete, such was the frantic advance in the armor and artillery of the time. Their cannons were never fired in war action.

In the 1864/67 the ship was modernized, changing its cannon batteries and was again improved in 1872/75. After these modifications it was in reserve service until 1883. In 1901 it was used as a depot in Portsmouth. In 1929 it was converted into a floating dock for tankers in Pembroke, carrying out this task until the years 70. In 1979 it was already a historical relic, being transferred to the Maritime Trust for its restoration and conservation as a museum ship.